Inside a core processing line at the National Ice Core Laboratory

The 122-millimeter (4.8-inch) diameter cylinders of ice that make up the ice core contain uniquely detailed information on past environmental conditions during the last 68,000 years, such as the atmospheric concentration of greenhouse gases, surface air temperature, wind patterns, the extent of sea ice around Antarctica, and the average temperature of the ocean.

Successfully retrieving the ice core is the culmination of an eight-year project to obtain a paleoclimate record from one of the remotest parts of the Antarctic continent.

The WAIS Divide ice core was recovered at a field camp in the center of West Antarctica, 1,040 kilometers (650 miles) from the geographic South Pole, where the ice is more than 3,460 meters (two miles) thick.

The drill site is at an ice divide (which is analogous to a watershed divide), where the ice is flowing out to the sea in opposing directions. The selected drill site is characterized by a combination of moderate ice accumulation rate, thick ice, and other characteristics that preserve detailed information on past environmental conditions during the last 68,000 years.

The drilling of the ice core ceased 50 meters (164 feet) above the contact between the ice and the underlying rock, to avoid contaminating a possible water layer at the ice-rock contact. The basal water system may consist of water-saturated, ground-up rock, and has not been exposed to the earth's surface for millions of years. It may harbor a unique and pristine biological environment that the U.S. scientific community does not wish to contaminate. 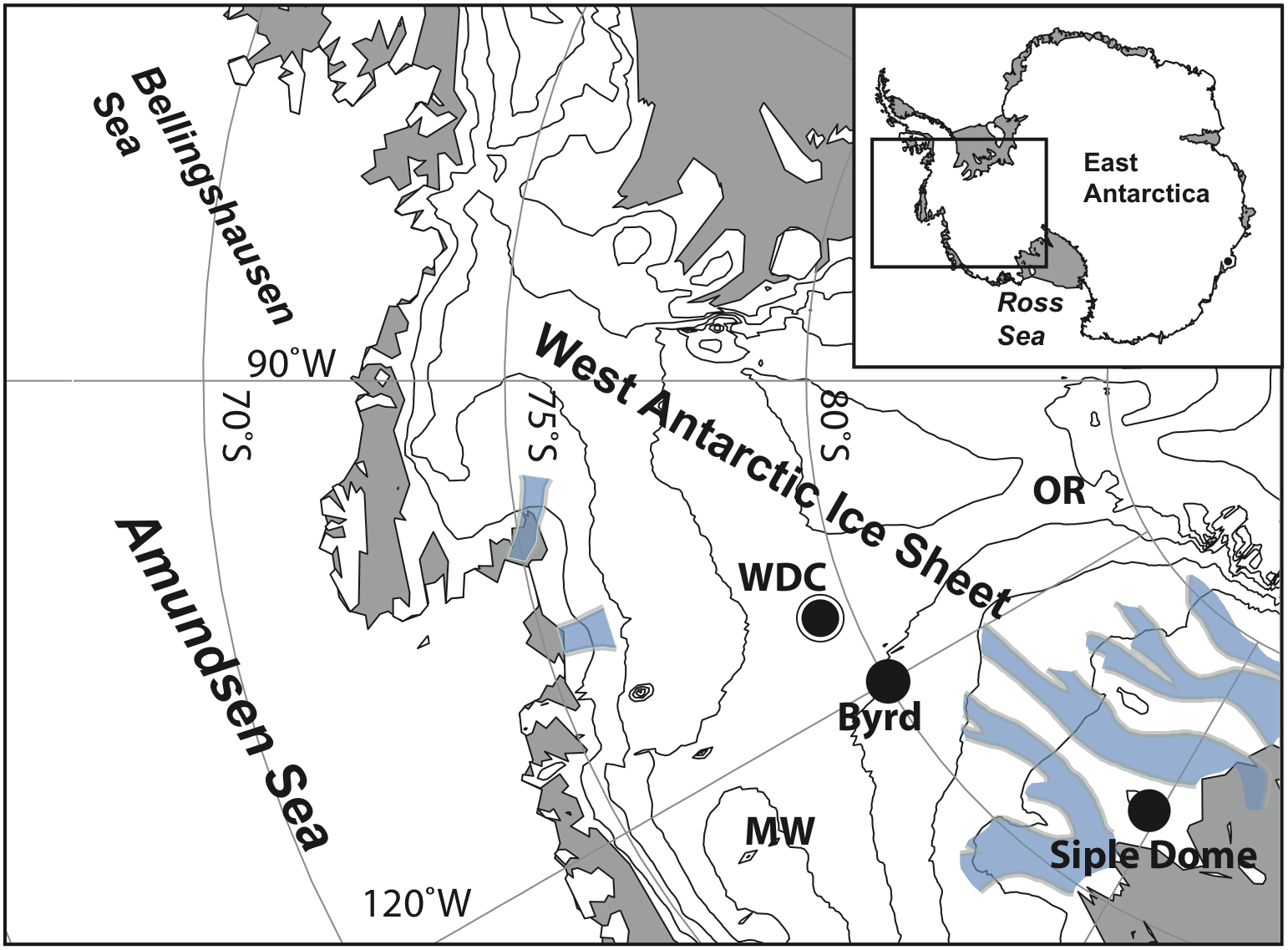 In the WAIS Divide ice core, each of the past 30,000 years of snowfall can be identified in individual layers of ice, with lower temporal resolution records extending to 68,000 years before present.

By allowing an examination of past climate at an annual resolution, the ice core record is helping scientists understand why climate can change abruptly and how climate may unfold in the coming century.

Other ice-coring projects have produced cores of lower temporal resolution, showing that the current level of atmospheric greenhouse gases, which is due to the burning of fossil fuels, is the highest in at least 800,000 years. The ice from the WAIS Divide ice core that is between 30,000 and 68,000 years old — while not containing records with annual resolution — contains a higher time resolution record than previous projects.

When snow falls at WAIS Divide it rarely melts, and instead builds up in thick annual layers, which are compressed into ice by subsequent snowfall.

The ice layers contain dissolved chemicals, insoluble dust particles, and atmospheric gases that were present when the snow fell.

The core was sampled at NSF-ICF, and subsamples where sent to 17 individually funded institutions for analysis.

The main objective of the WAIS Divide ice core project was to investigate climate from the last glacial period to modern conditions, with greater time resolution than previous Antarctic ice cores.

The WAIS Divide ice core has provided the first Southern Hemisphere climate and greenhouse gas records of comparable time resolution and duration to the Greenland ice cores, enabling detailed comparison of environmental conditions between the northern and southern hemispheres, and the study of greenhouse gas concentrations in the paleo-atmosphere, with a greater level of detail than previously possible. The WAIS Divide ice core is also being used to test models of WAIS history and stability, and to investigate the biological signals contained in deep Antarctic ice.

NSF's Office of Polar Programs funded the research, primarily through its Antarctic Glaciology Program. Some additional funding was provided by NSF's Antarctic Organisms and Ecosystems Program. Logistical support was from NSF's Divisions of Antarctic Infrastructure and Logistics. The Ice Drilling Program Office and Ice Drilling Design and Operations group designed the drill and conducted the drilling. The National Science Foundation - Ice Core Facility (NSF-ICF) — formerly the National Ice Core Laboratory (NICL) — designed and built the core handling systems at WAIS Divide and at NSF-ICF, and curates the archived ice core. The lead scientific institution is the Desert Research Institute, Nevada System of Higher Education, and the Chief Scientist is Dr. Kendrick Taylor. Science coordination is provided by the University of New Hampshire.