Season Objectives:
The main objectives of field work for this season were to set up the physical properties area in the processing arch, test and calibrate all equipment that will continue to be used during the follow-on drilling seasons, perform density measurements on the recovered core and perform sample preparation for thin and bubble sections.

Field Season Overview:
Nicole Reed deployed to Antarctica this season to perform field density measurements and section preparation on the core in support of I-168-M (Richard Alley, Penn State, P.I.). 552 lbs. of science cargo had been sent into the field in preparation for these activities.

Nicole arrived in camp on December 23rd. The first week was spent unpacking cargo and setting up the physical properties work space in the processing arch. Equipment calibrations were completed the following week after 120 AC power had been made available in the physical properties area. Testing on scrap ice indicated that there were stability problems with the stage on the sledge microtome that had been issued from Crary. ICDS personnel fabricated a new stage onsite. This stage remains in the custody of the project and will be used during upcoming field seasons at WAIS Divide.

Density measurements were performed on 21 10-cm samples taken at 20-meter intervals from 120 meters to 520 meters. Samples from the core at 540, 560, and 580 meters were deferred due to brittle behavior. Subsampling and lay-up for thin and bubble sections were accomplished on six samples. A hardware problem with the photography computer developed early in the processing and, as a result, only one photograph was recorded. Sectioning and photography will be completed during the cpl at NICL. All physical properties samples were packed in a segregated ISC container and will be retroed with the main ice shipment to NICL. The photography computer is being returned for repair or replacement.

Comparison of the densification behavior among WAIS Divide, Siple Dome, and GISP2 shows that densification at WAIS Divide is similar both in rate of change and absolute density values to GISP2. The three curves converge at about 180 meters. Below this depth, Siple Dome density values are generally lower than those for both WAIS and GISP2. The rate of change of densification flattens out at about 350 meters for both WAIS and GISP2 indicating probable bubble-pressure equalization at that depth.

Considerable low scatter in the density data from WAIS is probably indicative of the need to standardize the elapsed time between core acquisition and density measurement. It is likely that several of the low datapoints reflect wait periods that are unacceptably long at ambient temperatures in the processing arch. 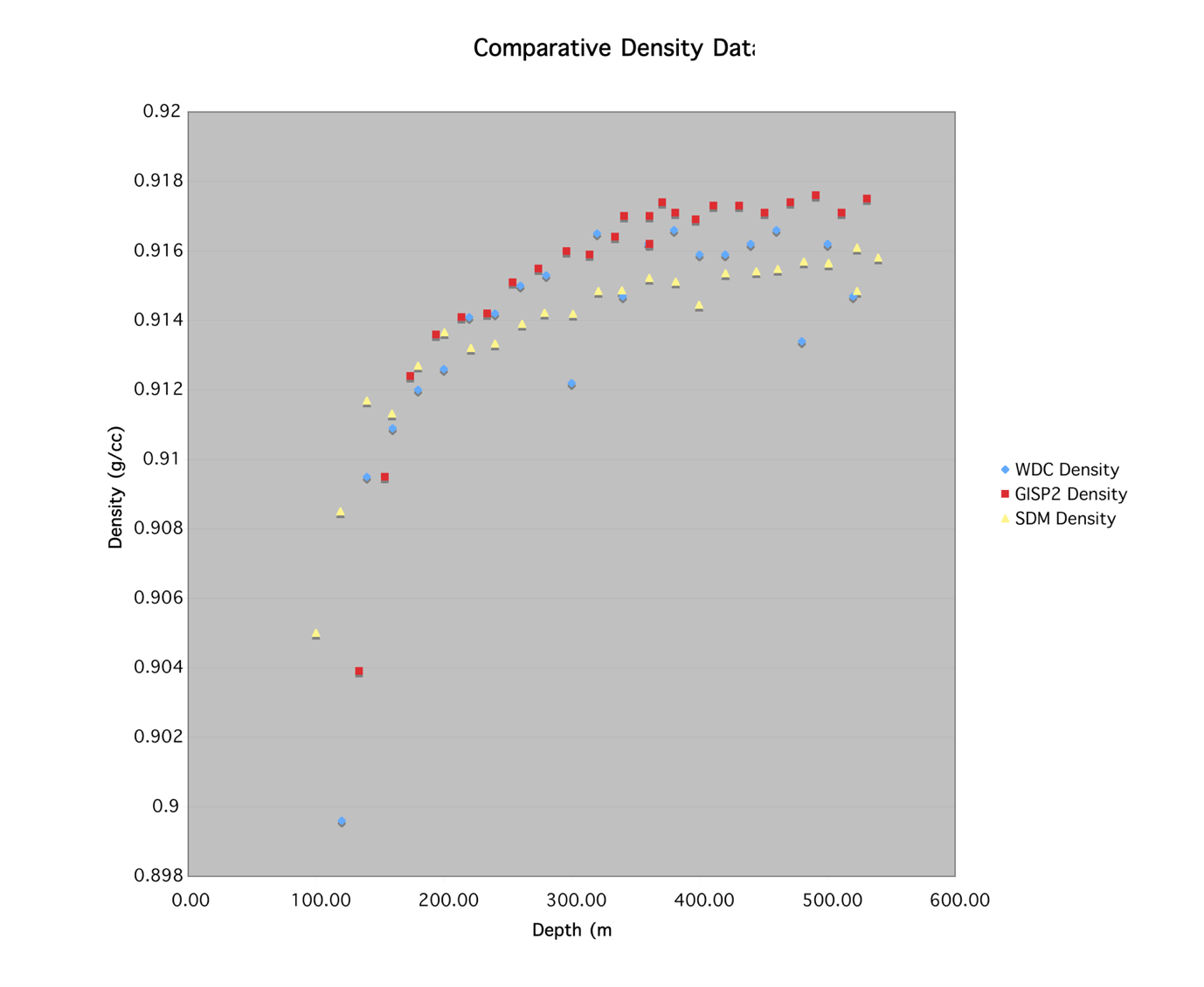