Field Season Summary:
The put-in crew, led by Camp Manager Dean Einerson, made it to WAIS Divide (WSD) on 5-Nov after a 6 day (since 10/31) delay due to bad weather and equipment issues.

On 22-Nov, Don Voigt (I-477), Krissy Dahnert, Josh Goetz, Mike Jayred, and Elizabeth Morton (T-350) arrived at WSD. Inspection of the Arch revealed that the core processing side sustained very little, if any, damage or heaving during the winter. The drilling side, however, sustained considerable heaving of floor panels between the core transfer truss and the slot entry hatch. This is the same area that sustained substantial heaving last season. At the start of the 2010-11 season, a measurement from the side of the Arch to center-line at the slot entry hatch showed 11″ of elevation increase. This season, the same measurement showed 19″ total rise in elevation.

Phase 1: Borehole Logging
The borehole logging crew of V. Miller (I-161), Gary Clow (Chief Scientist for Borehole Logging), Frank Urban (I-168), Ed Waddington, Sridhar Anandakrishnan and Dan Kliskiewicz (I-162) arrived to WSD on 29-Nov, and Ryan Bay (I-122) and Leo Peters (I-161) arrived on 01-Dec. After installation of the logging winch, erection of the logging Weatherhaven, and testing of the borehole logging tools, borehole logging commenced on 3-Dec with the lowering of the temperature probe. The initial round of logging, which was directed towards measuring the thickness of ice remaining in the borehole, consisted of two complete temperature logs, two complete roundtrip optical logs, a sonic log to 2000 meters at which point communication to the tool was lost, and a seismic log with a sequence of seismic shots at 3000 m, 2500 m, and 2000m. A second round of logging was conducted consisting of temperature logging, sonic logging to 2000 m, and one additional seismic experiment at 2000 m.

Phase 2: Borehole Deepening
On 23-Dec, Jeff Severinghaus (Chief Scientist for Borehole Deepening), Jakob Schwander (I-476), Gifford Wong, Logan Mitchell (I-477) and John Fegyveresi (I-477 and I-168) arrived to WSD. Borehole deepening began on 26-Dec. Pressure logging (Severinghaus) was conducted and completed successfully, allowing better fluid compensation of the borehole for stewardship purposes. Acoustic logging (Schwander) was also conducted in hopes of further defining the depth to the bed and hence the thickness of ice remaining. However, no further information on the depth of the bed was obtained by the acoustic logging. At 9:16AM on 31-Dec-2011, the final core was collected from the bottom of the borehole at the driller's (cable) depth of 3405 meters. This leaves ~50 m of ice under the bottom of the hole to act as a barrier between the basal water system and the drilling fluid.

As part of the borehole deepening activity, samples were collected from the bottommost cores for fugitive gases within minutes of the core being brought to the surface (Severinghaus).

Phase 3: Borehole Logging of Deepened Borehole
All three tools (temperature, optical and sonic) were used to log the additional ~75 meters of the main borehole and the logging was finished on Wednesday, 4-Jan.

Phase 4: Replicate Coring
Replicate coring methods were tested. The equipment operated as designed, but was not able to cut into the borehole wall enough to make a deviation. As expected with any new equipment and procedure, there were many technical issues to work through.

Supplementary Science: Quantifying the Spatial Variability of Chemical Deposition at the WAIS Divide Site
Gifford Wong, with assistance from Logan Mitchell and John Fegyveresi, extracted nine 5 m-long firn cores at WAIS Divide for the purpose of quantifying the local spatial variability of chemical concentrations in the snow and firn. The firn cores were collected along a 2000-m NE transect centered along 79.45022° S, 111.80365° W. In addition, a 1.5 m-deep snowpit (79.44931° S, 111.79823° W) was sampled for the purpose of isolating and identifying volcanic ash particles from the June 4, 2011 Puyehue-Cordón Caulle eruption in Chile (40°35′25″ S latitude). The snowpit was sampled for density, major ions, water isotopes, particulates, trace elements, and microbial loading. Snowfall from specific storm events during the field season was also collected, and a 3-sided backlit snowpit excavated. For the backlit snowpit, detailed photographs of the walls were taken, the physical stratigraphy between adjacent walls was noted, and samples were collected for density based on grain size and stratigraphy. Samples were stored in a total of 6 ISC boxes, placed in a normal (not SAFECORE) freezer-milvan, and loaded onto the re-supply vessel for transport to Port Hueneme.

Other
There were no major injuries or stuck drills.

Elizabeth Morton and Michael Jayred tested the Eclipse drill this season. The resultant borehole is WDC12A and it is 121.5 meters deep. The position of WDC12A is 79° 27.86′ S, 112° 06.69′ W. The hole is cased for the top two meters, and the casing extends to 2 meters above the current snow surface. An additional 1.5 meters of casing is stored in the Arch for extension in the future.

Acknowledgements:
There was great support from RPSC, particularly the camp staff. Despite a particularly stormy season and heavy drifts, camp was maintained in outstanding condition throughout the season due to the exceptional camp management skills of Dean Einerson. The staff from all of the organizations (RPSC, IDDO, and science) worked and played exceptionally well together. 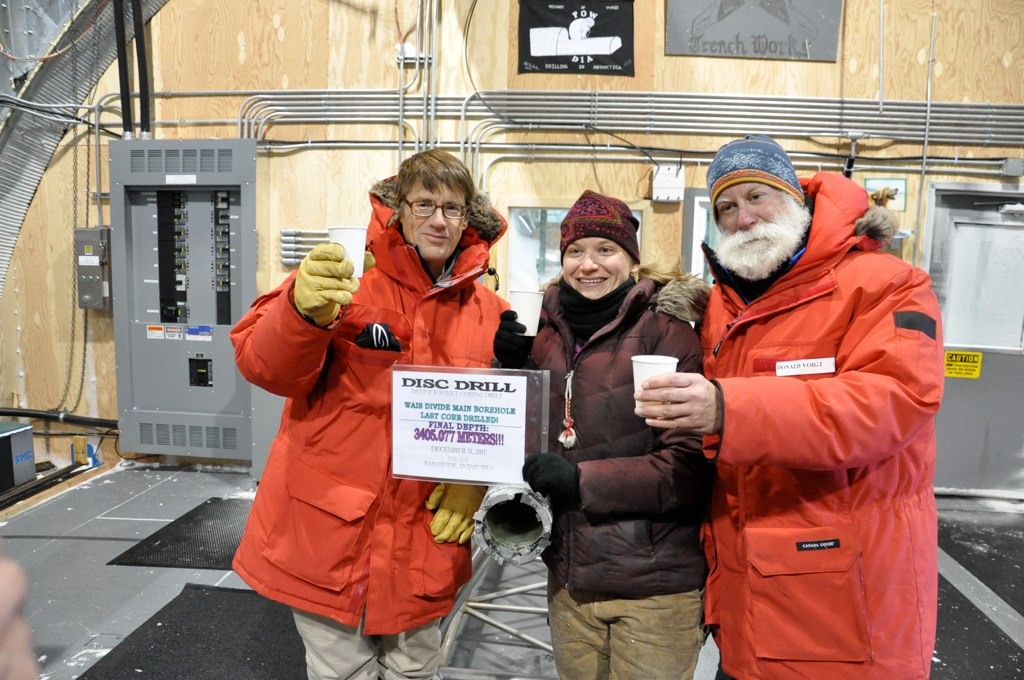 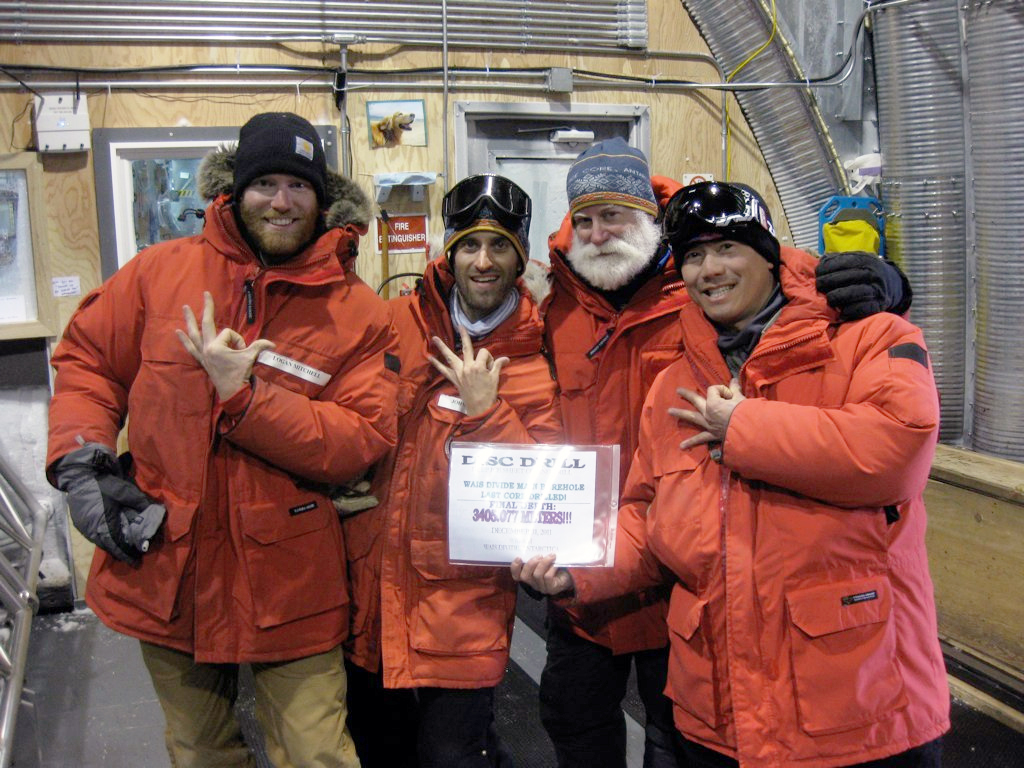