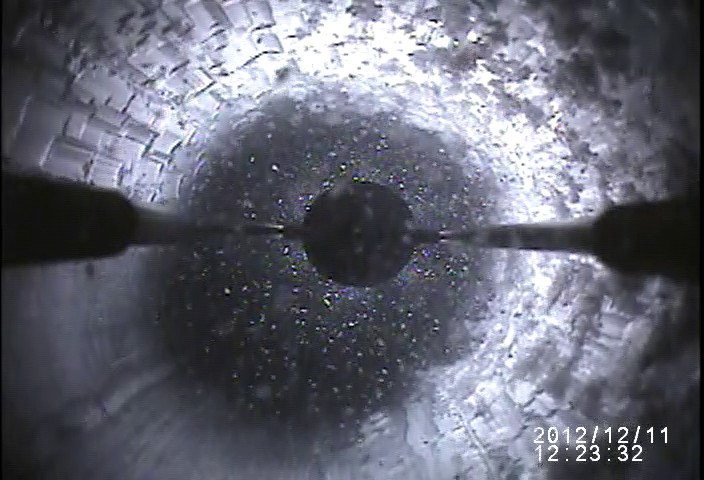 Time for a major a celebration! On Sunday night (16 December 2012) the IDDO team successfully recovered 1 m of replicate core from a depth of 3000 m. This allows us to collect additional core from depths of high scientific interest at any depth in the borehole, while still maintaining the ability for logging tools to make measurements in the entire borehole. To our knowledge this has not been done before. Accomplishing this unprecedented effort so early in the field season is way beyond anyone's expectations. This first core was ~80% of a full round (see image below), but as they continue to core on the new path they will soon be recovering cores that are 100% round. A down hole image of the deviation when it was about half done is above. The side of the borehole in the lower left of the image has been widened by ~7 cm. 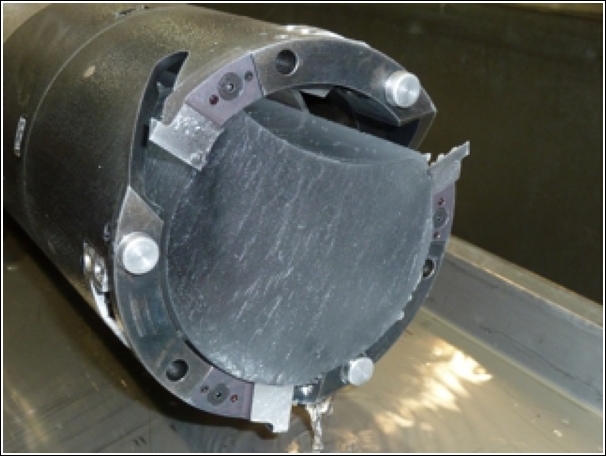 Recovering replicate core starts by lowering equipment to a depth of special interest and shaving, or broaching, ice from one side of the borehole. All boreholes have a slight inclination (tilt) to them, and the ice is shaved off only the higher side (the headwall) of the hole. The broaching continues until a ~13 m tall wedge of ice has been removed from the side of the hole. The tip of the wedge points up the hole and the penetration of the wedge into the side of the borehole increases to ~10 cm at the bottom of the wedge. The bottom of the wedge forms a shelf, and is the starting point for recovering "replicate" core that is parallel to the main core. The wedge of removed ice provides space to tilt the coring drill out of the main borehole so the coring drill head can core into the shelf. Replicate core will be recovered along paths that are ~7 to 92 m long depending on the science needs. Many deviations can be made in the same borehole, so replicate core can be collected from many zones of high scientific interest in the same hole.

The drill uses arms that push against the side of the hole to tilt the drill in the borehole allowing drilling operations to be directed at a specific side of the borehole. To perform the process requires a range of sensors (azimuth, inclination, horizontal force, amount of extension of the arms, cutting speed and torque), and good communications between the drill and engineers.

The deviation is made out of the higher side of the borehole so that borehole logging equipment can slide down the lower side of the borehole and not get trapped in the short hole the replicate core was recovered from. Deviating from a borehole is a common practice in industrial drilling, however to our knowledge this is the first time it has been done on the higher side of the hole, which is more challenging. Testing with a logging tool has confirmed that the deviation does not interfere with logging the hole below the deviation. Other ice coring groups have deviated from the main hole and collected additional core parallel to the main hole. Those groups started the process by plugging the main hole, which eliminated the ability to access the main hole below where the deviation was made. The ability of this system to collect additional core from zones of high scientific interest without blocking access to the lower part of the hole is a major advance.

The IDDO team tested this technology for two weeks last season at WAIS Divide. The objective for last season was to learn enough to develop the equipment and procedures to collect core this season. IDDO used that knowledge and worked may extra days during the summer to be well prepared for this season's effort. IDDO can now deliver replicate core from any depth we want on a routine basis. Key people in the development and deployment of this technology are Jay Johnson, Nicolai Mortensen, Chris Gibson, and Krissy Dahnert.

In other news, only one of the two main generators is working and last week it had two unexpected shutdowns. So far the camp staff has been able to correct the generator problems with minimal loss of time and no setbacks to drilling. This is a critical issue and is the focus of a lot attention.

Don and Krissy's weekly reports are below, but their reports were submitted before the replicate core was recovered and hence do not have any details about the first core.