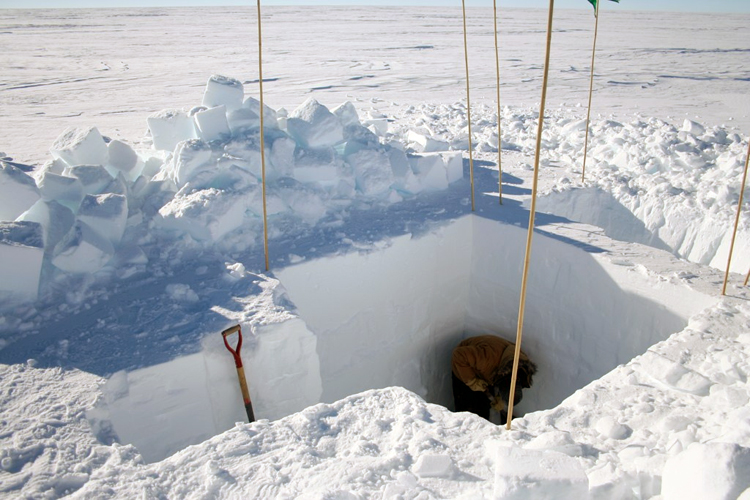 It was a very productive week getting ready for drilling. Camp population is now 44. The following activities occurred.

The arch floors and hatches have been repaired. The cooling system is operational and stable. The generators shut down twice last week. We need to make sure we have reliable power before we can put the drill in the hole. There are some electrical issues in the arch and the lack of an electrician on site is a concern.

The drill and core handling crews have been focusing on safety training. This involves showing and discussing the hazards and practicing safe procedures. A RPSC safety inspection was also completed.

We sent 256 meters of ice that was drilled last year to McMurdo. The ice was not sent last year because we did not have enough capacity in the SAFECORE shipping containers to ship it from McMurdo to NICL.

Many, many tasks were completed to prepare for drilling and core handling. As always there was a lot of equipment to de-winterize, install, and test. No major problems were encountered despite the long list of equipment that was brought back to operational status.

Summer Rupper's light traverse party (I-158) organized their equipment and left WAIS Divide. They are drilling shallow cores and doing shallow radar to compare the spatial distribution of accumulation as measured on the ground and by satellite.

Giff Wong arrived at WAIS Divide, and after a short overlap with Don Voigt, Giff assumed the responsibility of being the Science Representative. This change over was planned. We thank Don for his efforts during the critical task of getting our staff and materials to WAIS Divide and starting to spin up the operation. Giff, Geoff Hargreaves (NICL), Krissy Dahnert (lead driller) and Paulene Roberts (camp manager) are now the lead people on site.

We are still running about a week behind what we had hoped for. If the drillers had not put in the extra effort to remove snow from the slot we would be further behind. We hope to start drilling this week.

Below are the two SITREPs from Don/Giff and Krissy that provide all of the details.