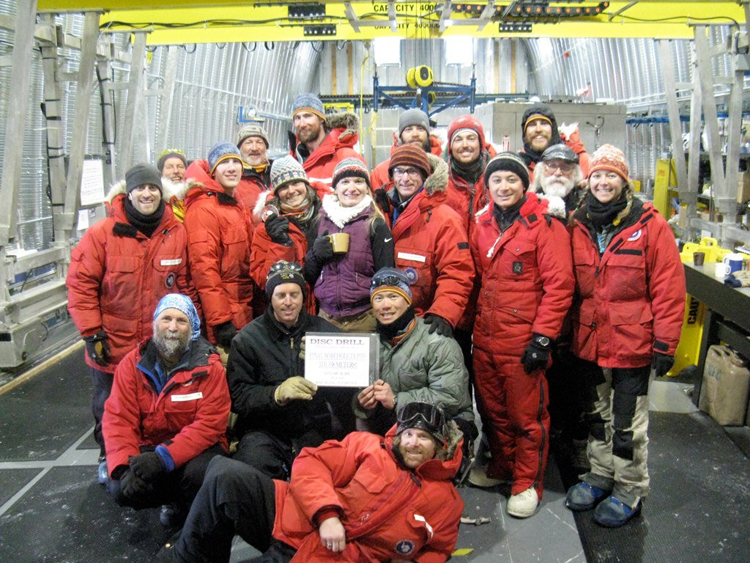 Having reached our depth goal and run out of time we are done for this season.

All week we were packing everything that was not needed for the final push, including the email link. Four Jamesways were taken down and everyone squeezed into what was left. Jay and Krissy operated the drill for the last run, and we all squealed when the cable length passed our goal of 3,330 m. People started to drift into the drill arch and soon the whole camp was there. Krissy had selected a rocking sound track and when the drill came up with the last core the 45 people in the drill arch were putting out enough energy such that we could have shut down the generators and all the equipment would have kept working. There were handshakes, hugs, and a crowd filled with huge smiles. Then there were a few toasts to the core and everyone that made this possible. Everyone that wanted to drew an up arrow on the azimuth line than ran along the last 3 m long crystal-clear segment of core. 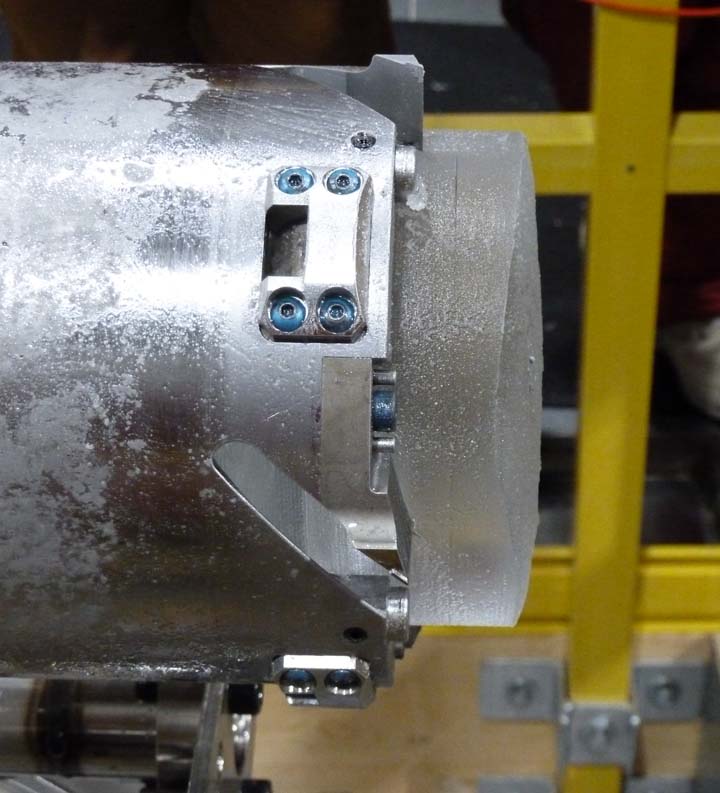 After lunch the drill was sent down again specifically to determine the borehole temperature. It was a slow trip down, a pause at the bottom, then a slow trip back up, all without the heat-producing motors and expectant crowd. The drill brought up an unexpected treat of 11 cm of core (see photo at left) that had been left behind from the previous run, sort of an "encore core" that brought the length of the core to 3,330.030 m, but that number will change after the core processing this summer adjusts the field logging. The drill cable reports a length of 3331.583 m, but the cable length changes a bit between runs possibly due to changes in the temperature history of the cable. Please use 3,331 m as the depth, as it does not overstate the precision of either measurement.

The stopping depth of 3,330 m had been chosen before the field season began because it was as close to the bed as we could go and still be confident we would not connect to a possible basal water system. This was a good depth to stop for several other reasons. We only had a half-day left for drill operations before we had to pack to leave. We used that time for the temperature run and to give Josh a chance to make improvements to the drill software which can only be tested with the entire drill assembly. Also, the plane to pick up the last of the cores was scheduled to arrive 8 hours after the last core was pulled up. Lastly, it would have been foolish to drill into the difficult, and potentially sticky, conditions near the bed when there was not enough time left in the season to recover from any complications.

The borehole temperature at 3,330 m as measured with the drill is -10.5 C. I guess that has an uncertainty of about 0.5 C. Projecting that to the bottom, I estimate the basal temperature is in the range of -8 C to -6 C. Temperature logging at the beginning of next season will provide a better measurement. This rough measurement suggests we have a frozen bed, and may indicate the ice is older than anticipated.

We spent the next day packing and reduced the previously vibrant arch to a shell of inoperative equipment. A crowd cheered as all the ice was loaded on a plane to start the long trip to NICL. The flight also brought in Steve Mikel, the refrigeration technician who has been maintaining cooling systems for our ice cores for at least 15 years, including at Siple Dome, here at WAIS Divide, and on the ships and trucks that move them to NICL.

Our cooks Michele Gentille and Francie Buck cooked up an amazing celebration feast, which included lobster, roast beef, fresh bread, green salad, apple pies and much more. It was a great way to celebrate and brought the whole camp even closer together.

Weather forced the season to start two weeks late, and there were numerous technical problems that made meeting our goals slim to impossible on several occasions. In the end with the luck of having 200 m more drill cable than was ordered, a lot of perseverance, and no major injuries, it all worked out.

The recovered ice contains a record of carbon dioxide with the highest possible time resolution for the last 100,000 years, and is excellent for comparison with the Greenland cores to study inter-hemispheric climate changes. It is a record that will be prominent in the study of human induced climate change for decades to come. Yet the project is only half over, and the analysis of the samples and development of integrated interpretations will take as long as the eight years from when the proposal for this project was submitted.

Many people were part of the team that made this possible, and some of them really stepped up this field season. Nicolai Mortensen was at WAIS a month longer than planned. At several times the success of the season depended solely on his brain and hands. Jay Johnson, Krissy Dahnert and Gifford Wong relentlessly pushed to get to the depth goal while keeping the crew in good spirits during stressful times. Paulene Roberts kept the camp running smoothly and well integrated with the coring operations. Julie Palais was our advocate in McMurdo and in Washington D.C., enabling the project to get more than its share of attention including the season saving five-day extension.

Below are the SITREPs from Giff and Jay that provide all of the details.

It's been a great ride, thanks for letting me be part of it.